As Tyler and I were leaving our favorite antique mall in Lewes, DE, last summer, I plucked a photograph jauntily resting on a table with other photos. I noticed two children and what I presumed to be some sort of pet pony.

Intriguing, but not really what I collect. (Perhaps of interest to the eminent Pet Historian?) I returned the photo to its perch as quickly as I picked it up.

I looked at it again. This time, I saw what Tyler saw: a painted screen. 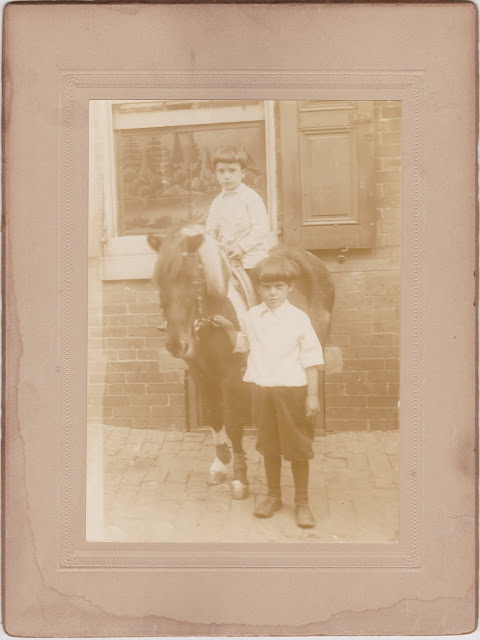 I collected my loot (hard to resist at just $8) and walked briskly to the cash register, eager to do some reading on the topic. I had recently seen a segment on the CBS show Sunday Morning about Baltimore painted screens, so it was cool to see a photograph of one so soon thereafter. Then, just a few months after this acquisition, I saw the book about Baltimore's painted screens on sale for just $10 at the National Museum of American History. Another steal!

It was time to do more reading.

Baltimoreans have been painting screens since about 1913. The provided passers-by with something nice to look at from the outside. They also allowed air to flow freely in the warm summer months while obscuring view to the inside of the house from the sidewalk. People have been painting screens since at least the eighteenth century. But in downtown Baltimore, it all started with a grocer. You can read more about this fascinating history and the state-of-the-craft in Elaine Eff's book The Painted Screens of Baltimore.

It's hard to say with certainty if this photo was taken in Baltimore. It looks to me like the kids are from around the 1910s or so. They certainly could be Baltimore kids.

Either way, I love the backdrop they chose for the photograph. And there's probably a story behind their four-legged friend as well.

What would you paint on your screen?

Posted by Nicole Belolan at 6:55 PM