Stuck Between a Decoy and some Berlin Work

I was practically born in a flea market. Thus it should come as no surprise that I could spend the rest of my life wandering the aisles of antique malls. So when Tyler and I visited the Brandywine Conservancy and Museum of Art (formerly the Brandywine River Museum) last Saturday to catch some Norman Rockwells in the flesh (at left), it was a forgone conclusion that we'd visit a favorite antique co-op just up the road.


What did we find?


About five minutes into the visit, I spotted some ice fishing decoys similar to these beauties at the American Folk Art Museum. On one, priced at $85, the fins had been made using recycled news- or magazine-print. How charming, I thought. It reminded me of the make-do spirit embodied in many of the artifacts at the Upper Bay Museum in North East, Maryland.

Since I had recently completed eight blissful days of work there documenting, deinstalling, inventorying, cataloguing, cleaning, and reinstalling a period room Decoy Shop (you can read more about that here - it was part of the University of Delaware Museum Studies/Sustaining Places museum inventory SWAT program), my duck decoy and hunting and fishing tool radar remains finely tuned into that stuff. 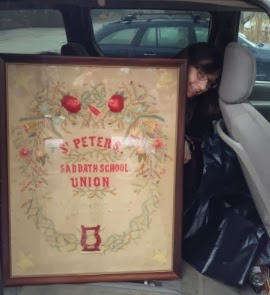 But a mere five minutes later, I spotted a large framed piece of Berlin work (a type of wool on cotton canvas pictorial fancy needlework popular in the mid nineteenth century) in the next room and made a beeline for it. At right, check out an example of Berlin work, which, as it turns out, I acquired from the same antique mall about a year ago. Tyler helped me get the prospective purchase off the wall but not without knocking down its hook in the process. An eagle-eyed co-op worker happened to be walking by. We apologized, and she told us not to worry about the casualty. But then proceeded to stand next to me pretending to be reading some paperwork while I examined the piece.

Like the one I bought a year ago, the prospective acquisition had provenance, and the price was right. (I have found that the pictorials, often featuring a scene and perhaps a name, call for less than do the sampler-style Berlin work, often featuring images as well as names, dates, and perhaps letters or numbers.) It had a lot going for it. But I am trying to save some pennies for a variety of things ranging from groceries to a 2015 tour of Waterloo and its environs.

So after carefully setting the needlework against a wall, we did a loop of the rest of the co-op. I saw a few more decoys--once you work with something, you see it everywhere--but none that I found to be particularly beguiling. In my travels, I've seen duck decoys range in price from under $100 to several hundred dollars. If you follow that market at all, you know they can fetch tens of thousands. Once a utilitarian, everyday item used not alone but in groups of tens or perhaps a hundred, after the decline of market duck hunting in the early twentieth century and then the transition to plastic decoys in the mid-century, duck decoys skyrocketed in "folk art" and monetary value. And so with the death of the wooden decoy came the renaissance of decoy-carving and the start of the collecting fever.

Thus far, I have kept the miasma at bay.

Not so for Berlin work, a subject near and dear to my nerdy little material culture heart. As we circled back to the Berlin work, we overheard a conversation between a co-op worker and a customer who had asked if the dealer could "do any better" on a metal rack with hooks. The worker explained that the dealer would give a 20% discount if the prospective buyer would pay by cash or check. The worker offered to put the rack on 24-hour hold. The buyer liked that idea but said that that wouldn't guarantee that she would buy it. After all, she noted, there's a snow storm coming.

And once she buys the rack, she still needs some money left over to paint it.

"You're going to paint it?," the worker asked.

"Oh...dear," the worker exclaimed, unable to hide her dismay and disgust.


Just as breathing down someone's neck while they take a look at a piece of needlework isn't the best way to sway an interested buyer, neither is chastising someone's plans to "deface" an anonymous piece of metal.

(I'm all for preservation, but you have to pick your battles, folks. I plan to transform my Berlin work into several tote bags. [Not really]. You laugh, but an acquaintance recently called to my attention an 1970s/80s article in an American "primitives" magazine that profiled a woman who made historic coverlets [like the one at right] into culottes.)

With the 'tique desecration exchange humming in the background, I hemmed and hawed for a few more minutes over the Berlin work. With dreams of Waterloo dancing in my head, at last, I decided we should head to Whole Foods. There, we chattered about living in a world where we can buy (but did not) $6.99 jars of "organic," "undyed" maraschino cherries at a place that employs guys to stand behind a fish counter wearing overalls in an effort to create the illusion that the workers are fresh off the docks.

I wonder if they know what ice fishing decoys look like.

There are some good web sites that address decoy collecting. Check out the Collectors Weekly site on "Vintage and Antique Duck Decoys." Their interview with a decoy collector is also informative; it mentions several antiquarian books that would be of interest if you want to learn more about identifying decoys if you're on the hunt.

In preparing for my work at the Upper Bay Museum, I found that C. John Sullivan's Waterfowling on the Chesapeake, 1819-1936 (2003) provides readers with the best historical context for duck decoy use. Those with a theoretical bent might enjoy Marjolein Efting Dijkstra's The Animal Substitute: An Ethnological Perspective on the Origin of Image-Making and Art (2010).

Finally, if you hunger for more information on Berlin work, check out my article "'The Blood of Murdered Time': Ann Warder's Berlin Wool Work, 1840-1865," in Winterthur Portfolio.
Posted by Nicole Belolan at 5:07 PM