Material Culture Minute: Where did you Get that Giant Papier-mâché Boar?

Perusing a small Shriners' Hall antiques show in New Castle, Delaware, today, I could not help but stand aghast at and bemused by the sight of a giant papier-mâché boar perched at one dealer's booth.


As I engaged the dealer in a conversation about where he got it (Lancaster County), when he got it (yesterday), and how it had been used (who knows--but it's "early"), I made Tyler take photos so I could share this unusual material culture specimen with you on the blog. The asking price--$300--was a little steep for me, especially once I started thinking about conservation and preservation concerns (enough to make an integrated pest manager's head spin)...not to mention finding space for it.

Could I suspend it from a ceiling?

Probably, but there must be better ways to drop a grad student's coin jar fortune.

As the succulent smell of snack bar bacon wafted through the air, I continued my stroll through the Hall, which was, I should point out for those looking for a wedding reception site, adorned with a disco ball.

As I poked through the tools and jewels, a man I did not recognize at first (so sorry!) said to me, "Hey! Did you win the raffle again this year?"

("Is this what is feels like to be a movie star who's recognized in the neighborhood Brooklyn coffee shop?," I asked myself.)

Reminded of my waning luck, I explained that, sadly, no, I don't think I won the Paper Americana Show door prize twice in four years.

(I did win it two times out of four, though. As Meatloaf sang, "two out of three ain't bad," right?) 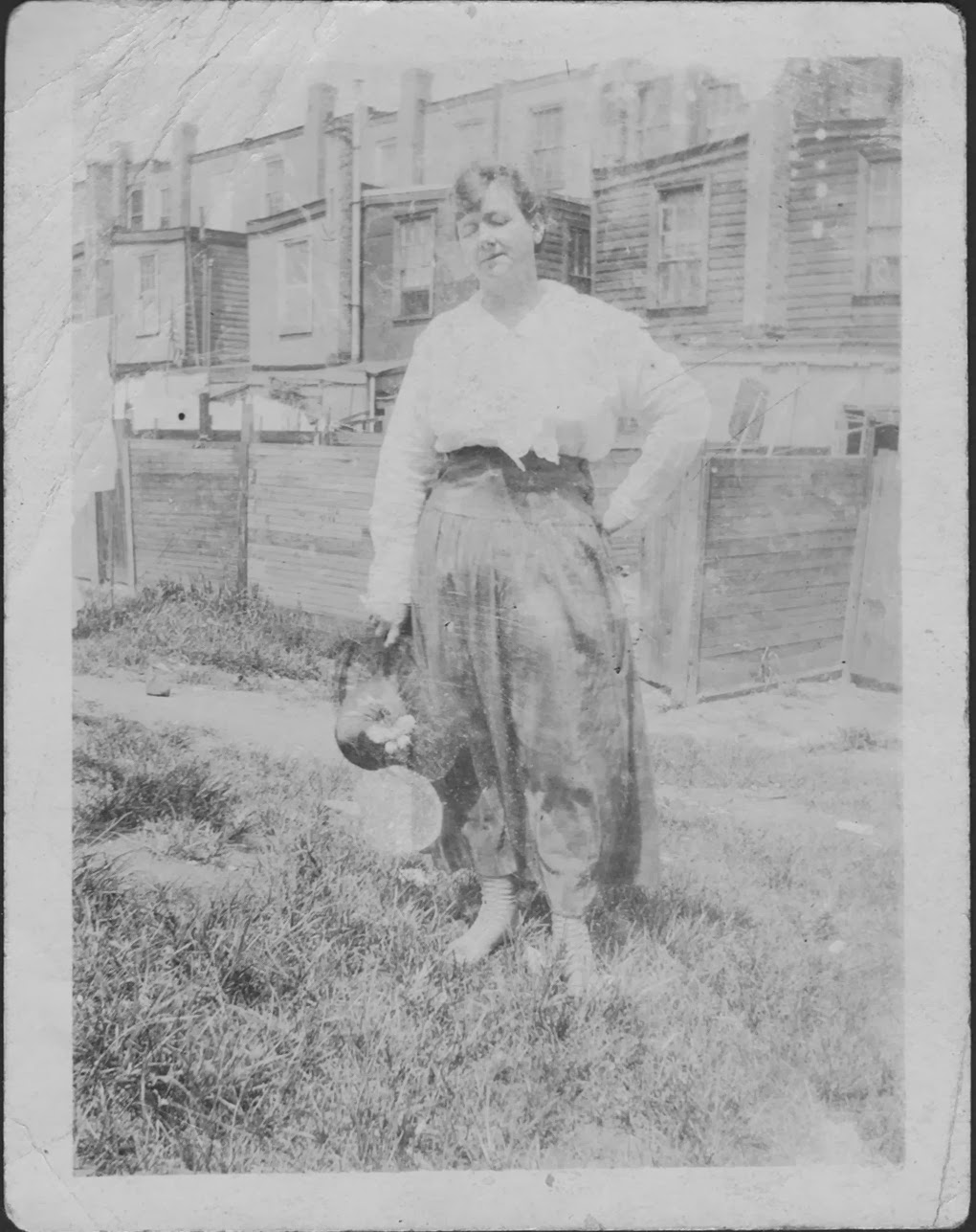 Still a bit dejected by the boar dealer's asking price, I moved on to less costly (but not less fascinating) pastures. With the boar (and that bacon) on my mind, I perused a container of snapshots priced at 25 cents each. I've really been enjoying snapshots. They're still rather inexpensive in comparison to daguerreotypes, tintypes, etc., yet they offer fun glimpses into the past that you just can't find in cased photos due to the limitations of the medium. For instance, here's a fascinating photograph of a woman standing behind row house additions in the early twentieth century. What can we learn about turn-of-the-century American life by examining these transformations? (Amanda Casper, a colleague at the University of Delaware, is asking just that. Check out her blog here.)
After a few minutes, one of the snapshot dealers (The Collector Gene) asked me if I had looked through that box previously. I shook my head no, but she meant that I had looked through the photos at none other than the Paper Americana Show just last month. Silly me.

"Well," I said, "I haven't seen anything yet that I recognize, so I might as well keep looking!"

We had a good laugh and exchanged cards. Apparently these friendly folks have an antiquing blog also.

On a roll, Tyler and I rounded out the early afternoon with a stroll through the ever entertaining New Castle Farmers' market flea.

A giraffe greeted us.

We pawed through the treasures displayed inside cardboard boxes on the ground.

And others clamored for a good find at a costume jewelry table.

I made it home with a few snapshots as well as some good stories. The next time someone asks me what I like about Delaware, instead of using the 'ole line that it's close to a lot of cities, the antiquing/flea culture will top the list.
Posted by Nicole Belolan at 4:24 PM