I bought this gem, labeled "Uncle Bill Moody" on the underside, in what looked like an unpromising antique mall in northern Virginia. I was struck by Bill's "here's my stuff" stance and the fact that he and the photographer took the trouble to bring the deer from inside of the house to the porch for the portrait. (As you can see from the detail of the photo below, the taxidermic deer heads would have fallen onto the porch floor if someone had attempted to open a door.) 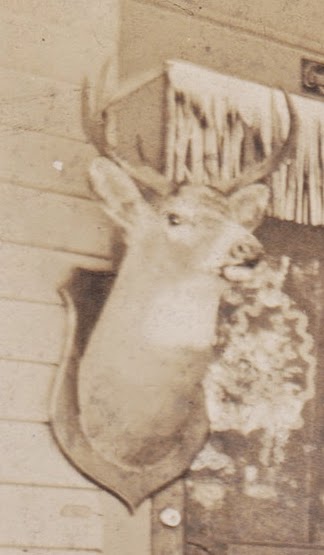 Bill had this photo taken some time after 1892 and probably before 1910 (his rifle was an 1892 or 1894 Winchester carbine, which I identified using Flayderman's Guide to Antique American Firearms and a little help from Tyler). Around this time, the professional taxidermy trade reached its apex. You can learn more about the history of taxidermy in Beth Fowkes Tobin's "Women, Decorative Arts, and Taxidermy," published in Women and the Material Culture of Death. Yet many forms of the art had preceded this turn-of-the-century manifestation of it. Women had prepared taxidermic animal specimens for decades to make fancywork. Explorers also preserved animals they killed while on exploration expeditions. Many specimens made their way into early museums. And avid hunters like Bill placed them on their walls. If Bill or a family member did the taxidermy work at home, they may have learned how from a book like Practical Taxidermy and Home Decoration (1890). The frontispiece from this book featured a deer much like Bill's and is pictured below.

Or a professional taxidermist may have processed the heads. It's also possible Bill ordered his trophies "ready-made" from a catalogue like Relics from the Rockies (1894). You can get a sense of the variety of objects Relics peddled from its frontispiece below.

But based on Bill's photo, I'm inclined to think that he hunted these deer himself and took pride in posing with death on the porch (perhaps carrying on the legacy of displaying "death in the dining room" [to borrow a phrase from one of my favorite books] in the form of sideboards decorated with scenes from the hunt). Either way, this portrait gives us some insight into what Bill's decor looked like inside his home and his standards of gentility. He could have, after all, left his hat inside the house.

Was or is taxidermy a part of your home decor? Let me know in the comments!

Taxidermy is also making a comeback among crafters and DIY-ers. Check out this recent article from the New York Times.

If you want to take a look at some nineteenth-century taxidermy manuals, you can view many online: