Look, Touch, But You Don't Have to Buy: On Shopping at the Delaware Antiques Show with No Money

Fancy antiques shows like the Winter Antiques Show (benefits East Side House Settlement) in New York City have their critics, but I relish the opportunity to attend such shows. They bring you up close and personal with treasures from America's attics (or dealers' backlog of stock)--in some cases, the likes of which you have never seen and you might never see again (and you can touch, them too!).

With that in mind, let's take a virtual tour of what stood out for me at the Delaware Antiques Show (benefits educational programming at the Winterthur Museum) this past weekend.

In keeping with the feline theme from the last post, check out this family of cats made from discarded socks (probably early twentieth century)... 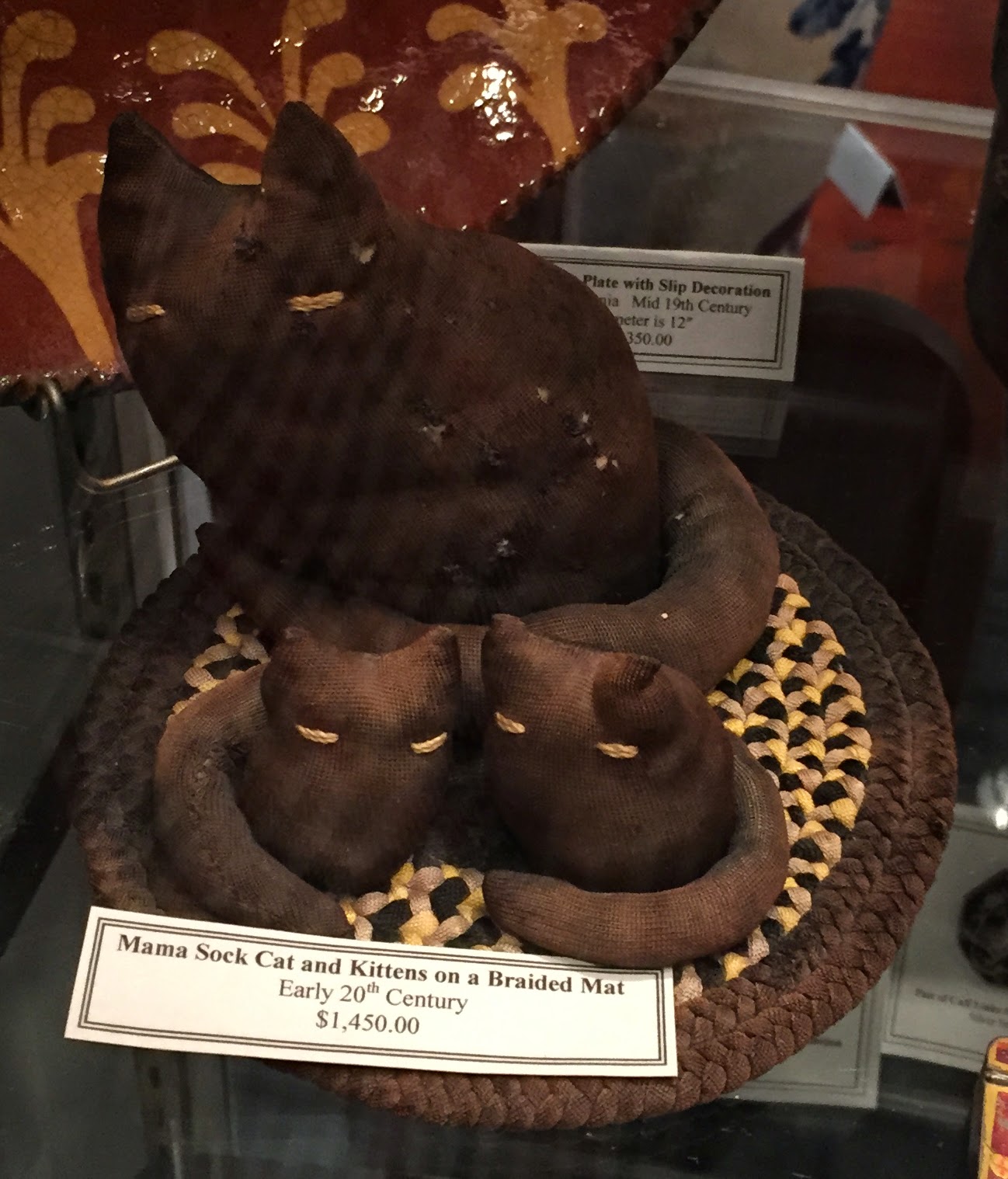 ...and this striking late nineteenth-century painted portrait of a cat. 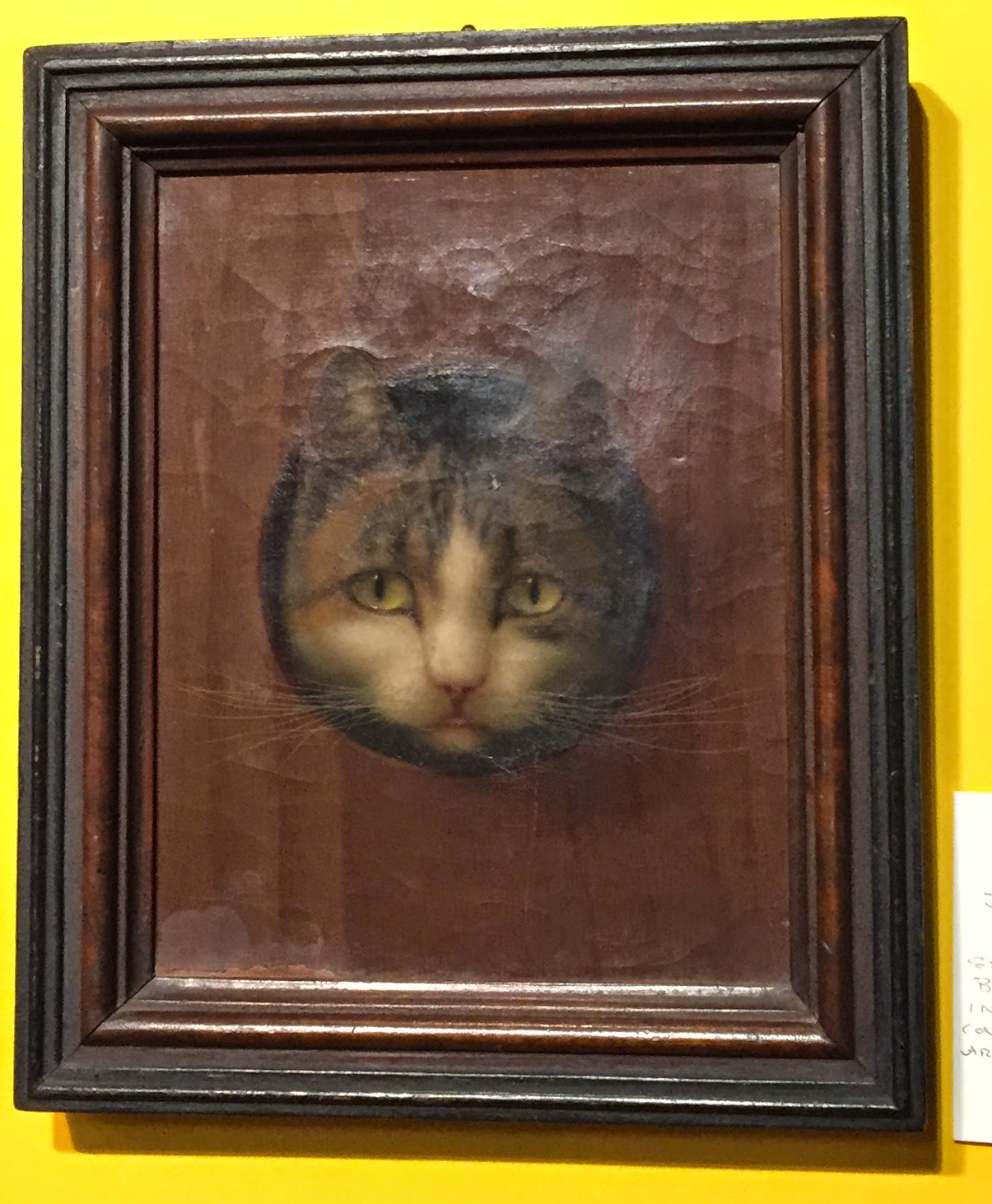 In keeping with the whimsical, here's a great early/mid twentieth-century pediatric dental cabinet.

Couldn't this be repurposed as a jewelry box? 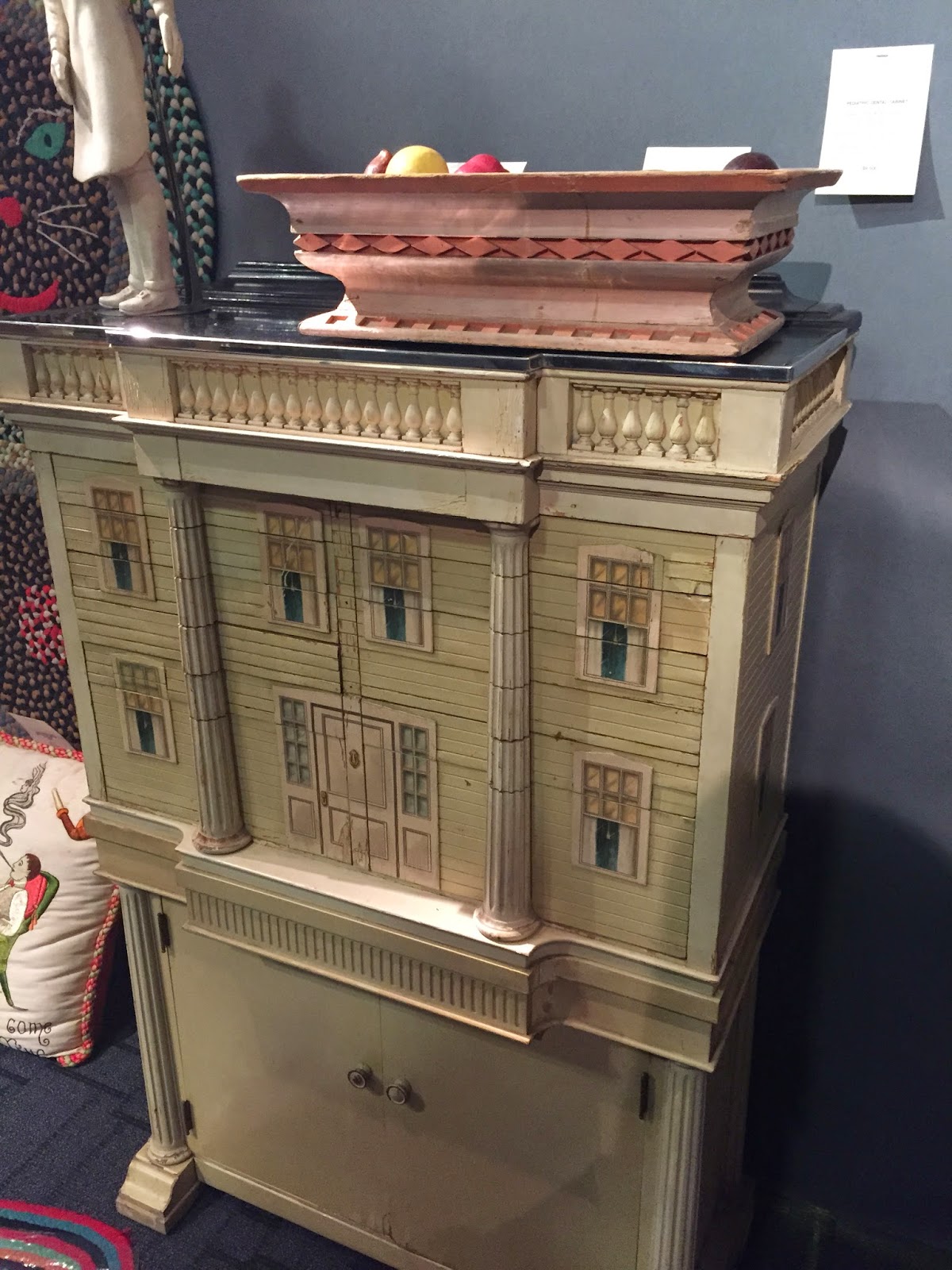 For the Maryland crowd, here's a charming 1860s map (though I must say it looks better in person) of a proposed lumber business for a spot near Port Deposit done on silk. Collector, beware! Silk can be a difficult media for which to care. 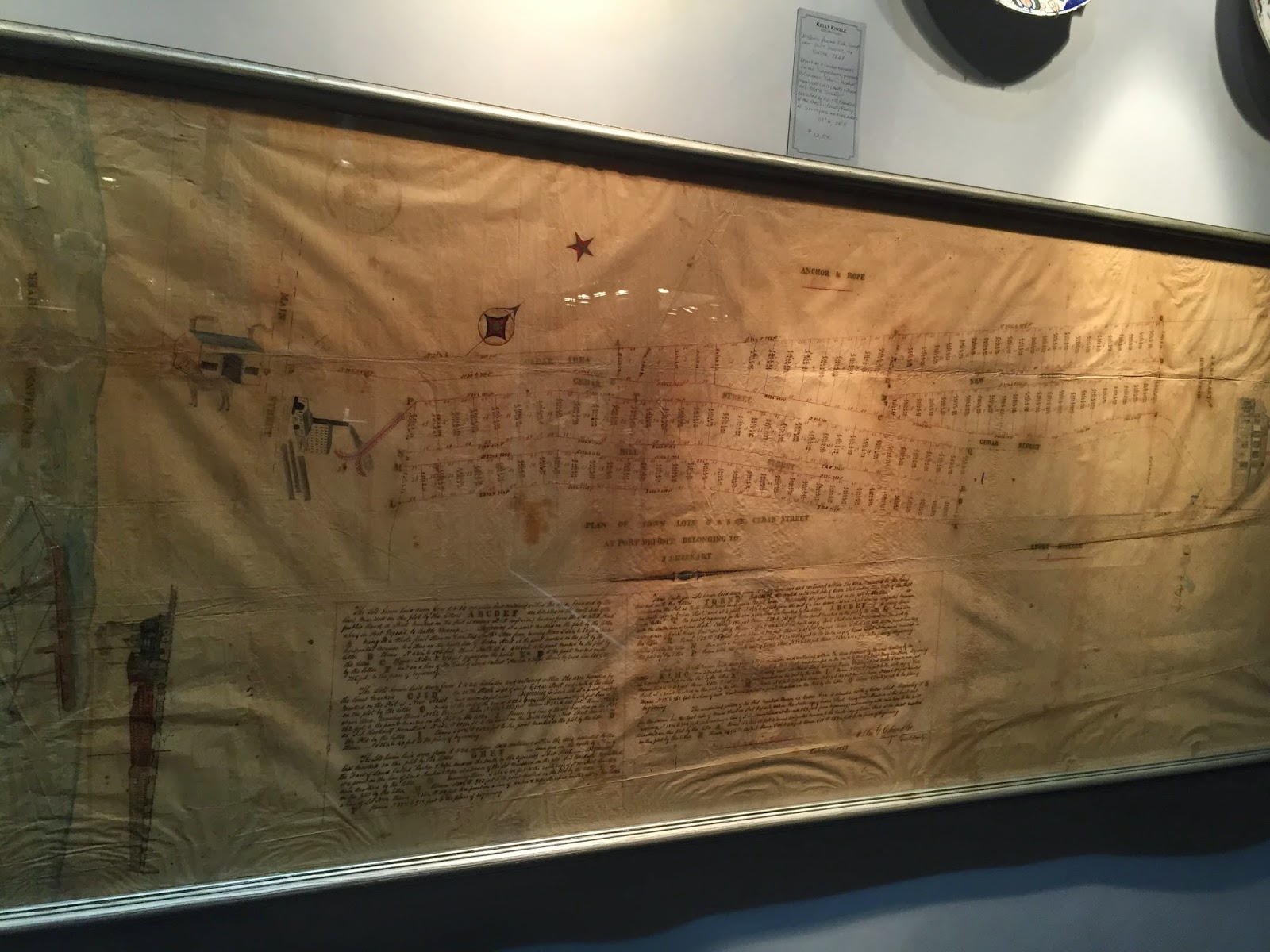 And because I cannot help myself, here are my two favorite Berlin work examples from the show. The first, dated 1848, is in impeccable condition. The second, probably from the mid-late nineteenth century, features an original arrangement of a range of Berlin work designs.

Who said all Berlin work was the same? 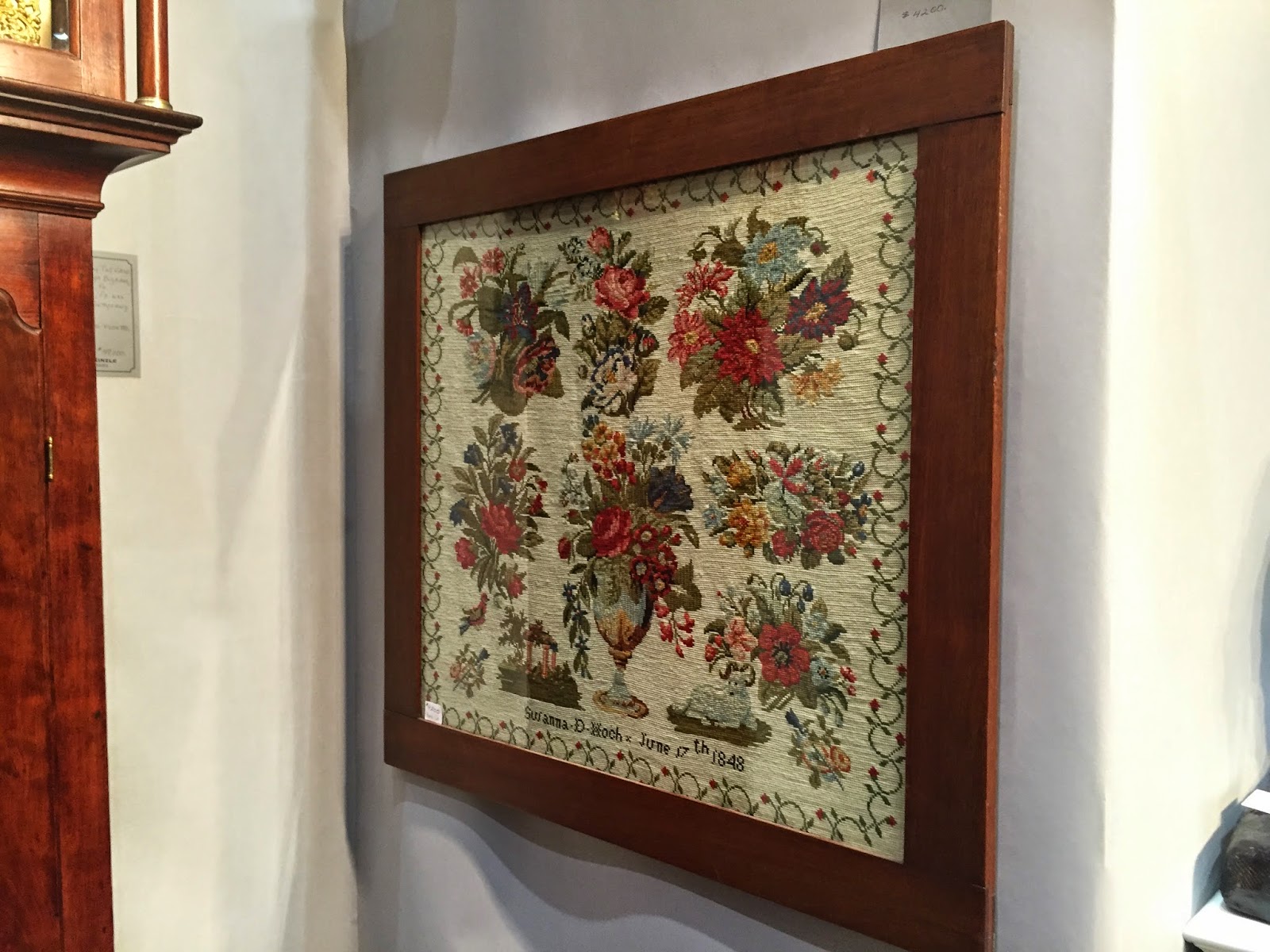 I'll conclude this tour with a haunting and very unusual painting. 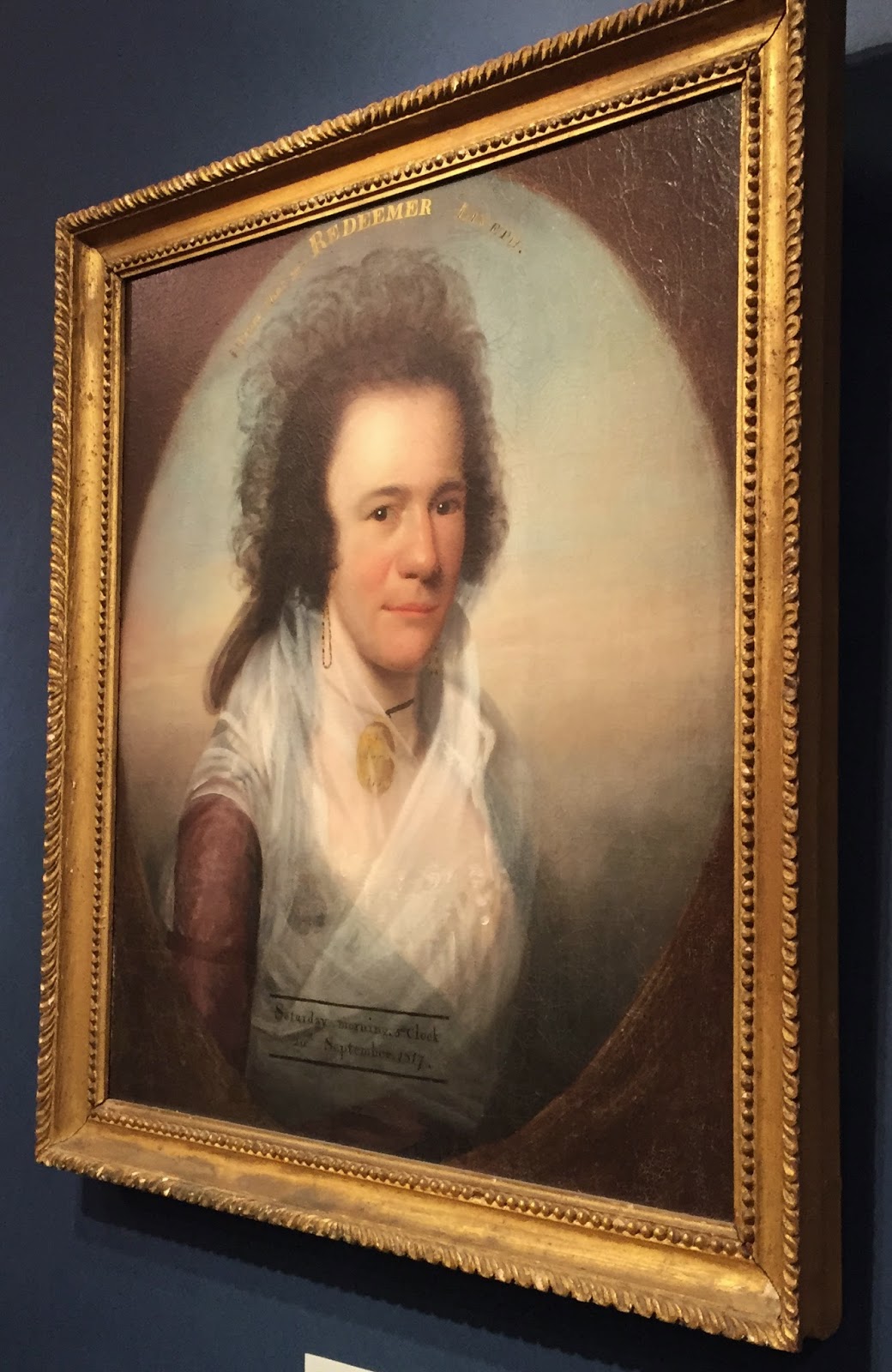 It seems that the portrait was painted around 1800 and that the inscription at bottom noting her passing--"Saturday morning, 5 o'Clock/20th. September, 1817"--was added later.

Wouldn't this be a great centerpiece for a show about mourning and remembrance in the eighteenth and early nineteenth centuries? Several museum exhibitions showcase mourning as a central theme this season. They look great, but I can't help but be disappointed that mourning exhibitions so often cover the latter half of the nineteenth century. Have any shows featuring that theme attacked an earlier period?

I saw a lot more cool stuff and could go on forever, but I think you get my point. You don't need cash to enjoy these shows - just some curiosity.
Posted by Nicole Belolan at 5:17 PM