And so that's why I came home from the Allentown Paper Show on April 25 with spices and other relics from the Bible Lands.


That's right, I snatched up my very own Sunday-School Teachers' Museum Collected from the Bible Lands. Dreamed up and manufactured by Paul S. Iskiyan's School for Christian Workers in Springfield, MA, around 1890, this gem contains twenty-two specimens of natural substances featured in the Bible. Based on other extant examples I found online (glad to see I'm not the only one saving saffron that's turning to dust), mine is incomplete, is missing an explanatory booklet, and is in poor condition. As you can see, each specimen is in varying degrees of preservation. The sackcloth (is this sackcloth?) has seen better days (as Tyler put it).


As a self-proclaimed heathen, I had never heard of some specimens. Was I really looking at Daniel's encapsulated pulse, as the cover of this better preserved example the National Museum of Play told me?


Yes and no. Pulse is a seed and not just a biological phenomenon. Similarly, circa 1890 children probably were equally unfamiliar with some of the items. Whereas we cook regularly with lentils in our house, they weren't all that common in American kitchens until World War II.

But that's the point of the "Museum." It's an example of an "object lesson." As the leading scholar on the subject Sarah Carter put it, object lessons gave children a way to learn about "the world through their senses, instead of through texts and memorization." Sarah explains that this "lead[] to new modes of classifying and comprehending material evidence drawn from the close study of objects, pictures, and even people."

In this case, Iskiyan and the teachers who used this treasure for teaching deployed it to make the Bible and its message--both of which are some of the least material concepts with which Americans grappled (and continue to do so)--more real to children. Presumably, they hoped spirituality would follow.

Turns our this particular "museum" held shelf space at another popular museum before it found its way to the Allentown Paper Show and into my clutches. I learned from the dealer that when Merritt's Museum of Childhood in Douglassville, PA, (known first as Merritt's Early Americana Museum and then merit's Historical Museum, according to this article) closed its door a few years ago, an auctioneer sold the Sunday School Teacher's Museum along with thousands of other museum artifacts. Sold by Pook and Pook and Noel Barrett, the Museum content ranged from a late nineteenth-century English scale model of a butcher shop ($73,700!) to groups of miniature pewter hollowware. 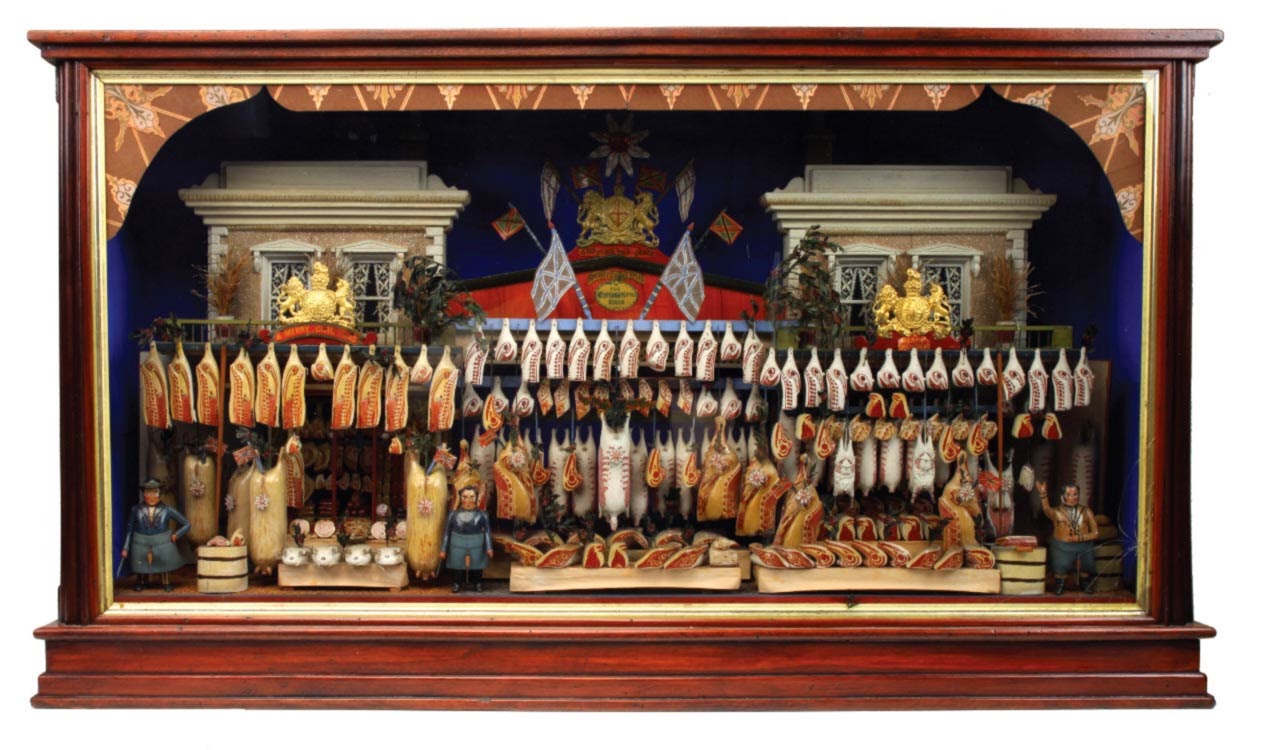 ...I also learned that Old Salem, which is perhaps best known for its significant collection of Moravian and Southern decorative arts, closed the toy museum in 2010 and sold the collection. 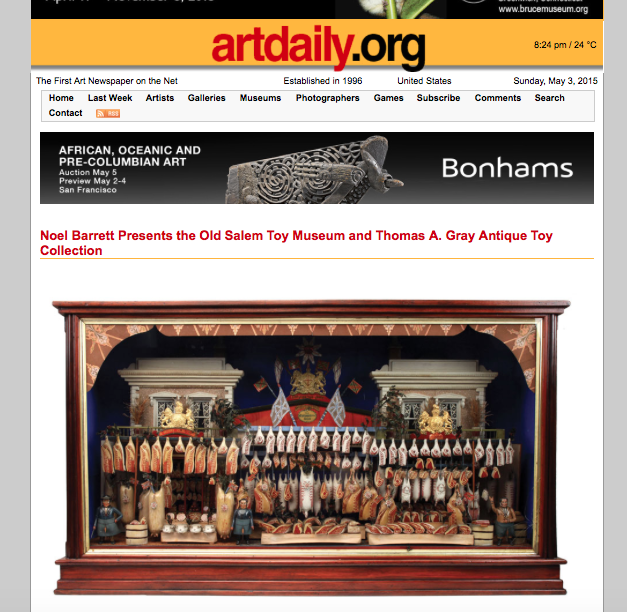 I saw the Old Salem toy collection intact when I first visited in 2008 and had no idea it had been dissolved -- but it makes sense given Old Salem's mission. All proceeds went toward conservation and other collections-related activities associated with the core Moravian and Southern collection.

It's striking that Barrett alone has liquidated four toy museum collections. What does that say about our changing interest in learning from traditional toys and play in museum settings?

I'm not sure where the butcher shop is now, but I hope that like my own piece of Merritt's Museum of Childhood History, it's somewhere teaching someone an object lesson.
Posted by Nicole Belolan at 5:36 PM